A decade of change brings the Great Melt to the Arctic

As the land of ice and snow, the impacts of climate chaos are most often measured as changes in ice. Sea ice, land ice and permafrost cover most of the Arctic, for much of the year. As air temperatures warm and weather changes, so too does the ice. The last decade has seen the greatest changes in the Arctic since record keeping began 40 years ago. Where once consistent patterns flowed of summer melt and winter replenishment, this cycle is now exaggerated in the summer months. 2012 remains the summer of greatest ice loss, on land and sea, but 2019 was very close to this, and the trend over the last decade has seen a shift toward lower sea ice extent over the Arctic and loss in the overall balance of ice on land. With temperatures an average of 2.7 degrees Celcius warmer at the poles, double that of the rest of the planet, the ice that cools our planet and defines the Arctic, has become incredibly vulnerable to change. 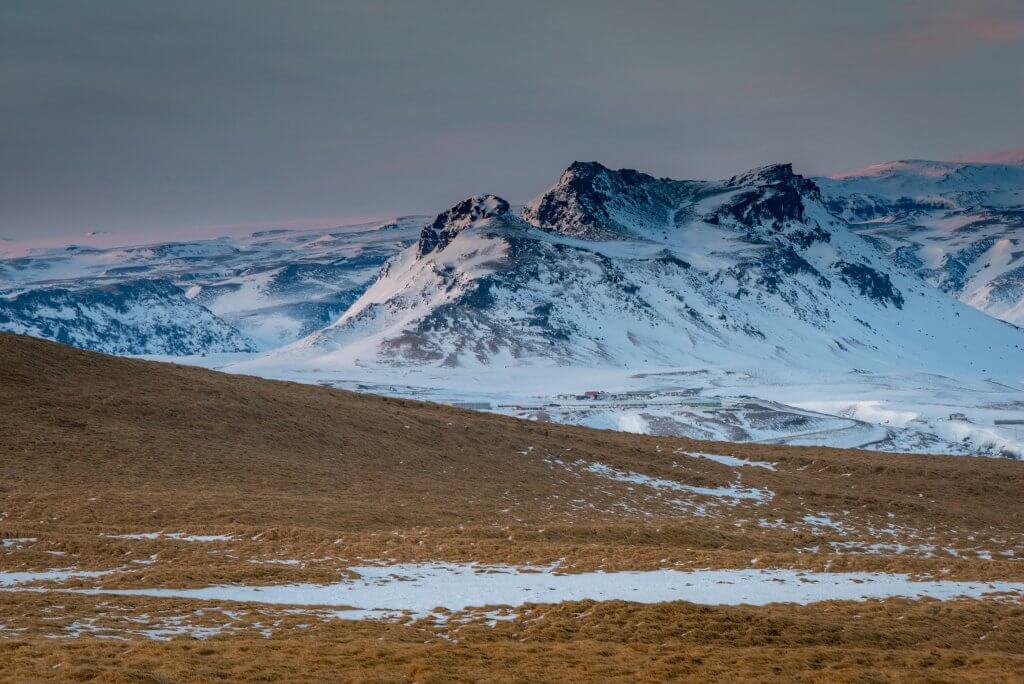 Evidence of Change Comes in Many Forms

The Arctic Arts team of visual communicators witnessed first hand the dramatic melt currently happening in West Greenland. With temperatures soaring to 40ºF above average the seasonal melt was more than 4 weeks ahead of schedule in May. Over 90% of Greenland experienced melting at its peak in 2019, with total ice loss estimated to be more than 2 gigatons (equal to 2 billion tons) on just one day alone.

While Greenland is a rather large body of land comprised mostly of ice, it is highly unusual for that much ice to be lost in the middle of June. The average “melt season” for Greenland runs from June to August, with the bulk of the melting occurring in July. The Arctic Arts Team saw dramatic changes unfolding in May, and the summer continued at this unprecedented pace.

The Arctic in flux

The Arctic is warming twice as quickly as the global average (a phenomenon known as Arctic Amplification). In 2016 there was a calculated 350 billion metric tons of fresh water melt from the Greenland glaciers and ice cap.

Average soil temperatures continue to rise throughout the Arctic tundra. With an average of 6 degrees Celsius of warming in the last 100 years, methane and carbon dioxide are being added to the overwhelming emissions of human activity. 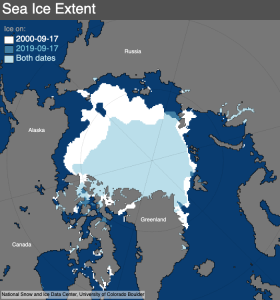 Sea ice is a critical piece of the Arctic puzzle. Changes in the extent and thickness of sea ice coverage impact animals, indigenous people, weather and ocean circulation patterns. Warmer air temperatures in the Arctic, particularly in the summer months, have resulted in dramatic changes in sea ice. The ice now covers less of the sea in summer and, it is thinner. Where multi-year ice, (ice that has built up layers over years and is whiter and denser), once covered great swathes of the northern seas, the seascape is now dominated by first year ice, which doesn’t reflect as much of the suns radiation, because it is darker and melts more easily. The summer of 2019 brought the lowest sea ice extent on record, tied with 2016. Spring came early in the Arctic and the ice declined rapidly. By mid-summer, with temperatures hitting highs up to 9 degrees Celcius above normal, the ice disappeared with alarming speed. For polar bears, this means being trapped on land where ice would normally allow them to move around. For indigenous hunters, this creates a difficulty in connecting communities normally accessible by dog sled over the ice. The land, including the glaciers that reach the sea, are subject to more tumultuous weather as the buffer of ice no longer protects vulnerable shorelines. And, because the younger ice reflects less of the sun’s radiation, more heat is absorbed by the ocean waters, creating a feedback loop with air temperature and altering ocean currents. Sea ice is one of the most easily observed, early signals of change in the Arctic 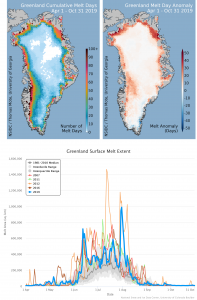 Greenland is an island blanketed in ice. The great ice sheet covers 80 percent of Greenland. Snow falls at the center of the island, building weight, which then presses down, forcing ice off the land in the form of giant glaciers. The ice sheet covers 1.7 million square kilometers. It serves as a giant reflector to the sun’s energy, providing a cooling effect for the planet. 2019 was a huge melt year for the ice sheet. The summer loss saw more than 300 gigatons of ice melt into the surrounding oceans. At the height of the summer melt, nearly 90 percent of the ice sheet was in a melting state, even at the higher elevations, where melt days are rare. The last decade has brought an over all loss in the surface mass balance (the difference between summer melt and winter replenishment of the ice sheet). There are significant consequences to a melting of the ice sheet. Sea level rise is tied primarily to ice melt. If the ice sheet were to melt entirely, it would raise global sea levels by 7.2 meters (24 feet). The cold water rolling off the Eastern side of southern Greenland appears to be slowing one of the largest ocean currents in the world, known as the AMOC. Weather, particularly in Europe, is tied to the health of this great oceanic current. Changes in salinity and density from the influx of fresh water impact marine ecosystems, changing food supplies and diversity. We need the masses of ice at our poles to maintain a balance in water, temperature and weather. To shift the trajectory seen in Greenland will require achieving carbon neutrality in less than a decade. 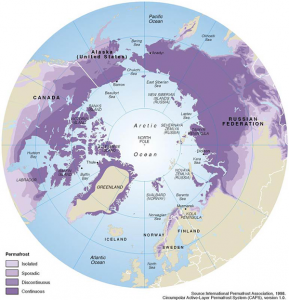 Covering nearly 24 percent of exposed land in the Northern hemisphere, tundra is a landscape of frozen soil and rock. To be classified as permafrost, an area must remain below zero degrees Celsius for at least two years. The depth of permafrost can vary from just a meter deep, to over 1000 meters. Summer brings warmth to the uppermost layer of tundra, giving way to a landscape of small, tenacious plants and the animals that thrive on them. With Arctic temperatures more than 3 degrees Celsius above average, this active layer grows deeper each year, creating a cascade of change throughout the tundra. Permafrost is thawing all over the Arctic. The newly thawed soil becomes active as the microbial processes that break down carbon rich organisms become productive in the warmth. These processes produce methane in soils with abundant water and carbon dioxide in dryer areas. Scientists estimate that permafrost holds approximately 1.6 billion tons of carbon dioxide. It’s impossible to know yet how much of that will be released into the atmosphere as the Arctic continues to warm, but there is fear that potentially huge amounts of these powerful compounds will be percolating up, as the soils thaw. As we work to reduce our own emissions, the Arctic is just beginning to add its own. With thaw of the surface layer, the landscape changes visually and functionally. More water covers parts of the surface. Water holds heat, creating even deeper thaw. Water also draws plants and animals due to its warmth and the availability of nutrients around it. Beavers have moved into the tundra, making larger ponds and disrupting fish movements. The ground itself can become unstable, causing areas to subside, called thermokarsts, which then hold even more water and can destroy infrastructure the people living in the Arctic need for homes, businesses and roads. With the increasing temperatures of near surface permafrost comes a warning to prioritize a carbon neutral world.